New Businesses and an Award 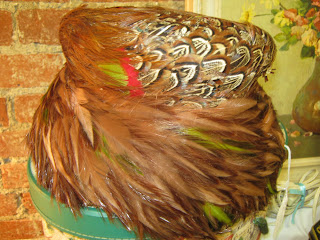 Walking down Market Street last week, I spotted several new businesses. That’s not unusual on Market Street. Someone--some business--is moving in or out all the time.

The two I noticed were side by side on the south side of the street and both were just getting set up, one not even officially open. Yet both owners invited me to come in a look around and gave me guided tours.

Don’t you love the hat above! I do. It’s for sale at Mint Velvet Vintage Interiors & Antiques, 24 East Market Street, as is this gorgeous framed picture. 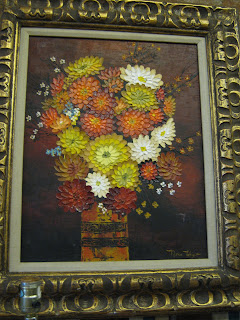 Vintage goodies and antiques are always good for memories. 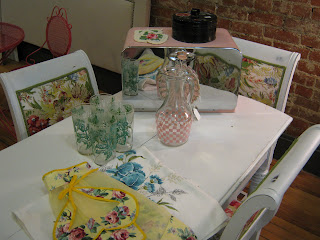 Next I visited AnnaMarri Soy Candles, 22 East Market Street and heard all about the owner’s transition into her new business. 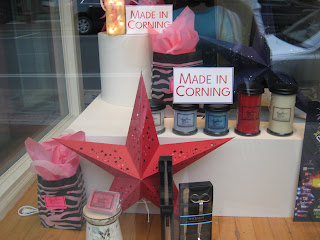 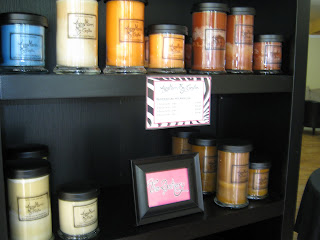 If you live local, stop in to welcome our new entrepreneurs and tell them you heard about them here.

I’ve written about a new transportation center to be built on Denison Parkway. Here’s a recent photo of some of the buildings which are on the demolition list for this project. The yellow building is/was Evergreen Express which is now on Market Street in the former Subway storefront (Subway has moved just up the street). 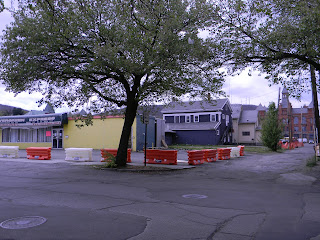 In that same photo, the two buildings behind Evergreen will also come down. In the far background is the Rockwell Museum of Western Art in the next block.

******
Coming to Corning NY May 24-27, 2012: GLASS FEST ~ “The third annual GlassFest is a celebration of glass & the fine arts in America’s Crystal City.” More information on Facebook. 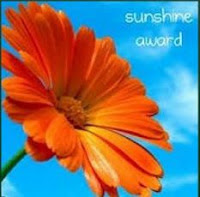 A special thank you goes to S. Harry Zade of The Narrative Imperative: Tell Stories or Die who nominated Corning NY Step by Step for a Sunshine Award. Behind this fascinating blogful of stories is former Steuben County resident Keith Wilson.

Accepting the Sunshine Award means answering 10 specific questions. I’ll do so to the best of my knowledge and memory.

1. What are your favorite things to do? Write... my blogs and my Helium articles, spend time with family, and walk around Corning taking photographs and talking with anyone who will listen to me.

2. Where would you most like to travel to? Japan. It’s been at the top of my list since I was a teen with several Japanese pen pals (still corresponding with one).

3. Who would you most like to meet who is still living? Oh, good grief, I can’t think of any one person. I want to meet lots of people.

4. Who would you most like to meet who has passed away? My paternal ancestors who fought in the Civil War. There were several.

5. What do you think is the hardest thing to do? Writing. It’s also the most rewarding.

6. What is your favorite non-alcoholic drink? Well, this is a silly, non-useful question, isn’t it! I suppose Wegmans decaf hazelnut coffee is a favorite, as is any kind of smoothie. (If this question was about alcoholic drinks, I’d say frozen strawberry daiquiri!)

7. What is your favorite charity? Since I’m a United Way volunteer, and they pass money on to numerous non-profits, I'll just say United Way. Also, is a library a charity? It’s a non-profit. I love libraries.

8. What are you proud of? Who... my daughter and son-in-law and all they’ve accomplished during their marriage, two grandsons, new house, and much more. Then there’s my son, in his twenty-second year in the U.S. Air Force.

9. What ambition do you still have? To win the Lottery! Every year, for years, I’ve made a list of what I’d do if I won a million. Always had a difficult time using it all. Now I have to figure out what to do with millionS! Don’t laugh at me. I’m old enough to be entitled to do whatever I want.

10. What is your favorite flower? Football mum (chrysanthemum). It’s been my favorite forever.

I’m supposed to pass the Sunshine Award on to other bloggers. It’s going around the Internet pretty fast without my help, so I’ll say here that I’ve met very few blogs and bloggers that I didn’t like. So, here’s to all of rest of you who are doing such a great job entertaining, enlightening and educating!

In case you didn’t notice yet, there is a new Blogspot Gadget at the top of the right hand column of this page. “Translate” allows you to choose a language, click on it and my entire blog will be immediately translated to allow easier reading by those for whom English is not a primary language.

Have you “Liked” Corning NY Step by Step on Facebook!

Posted by Kathleen Richardson at 5:44 PM