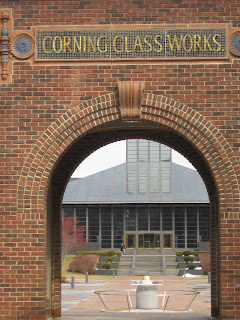 Early morning Tuesday, June 12, 2012 ~ overcast and rainy. A few distant claps of thunder. A day of rain? 66-degrees Fahrenheit outside. 78-degrees indoors, in my apartment.

I take so-o many -- too many -- photos and get behind in sorting them. That’s why I decided to take a look at Spring 2011 and see what pictures are worth sharing before I started clicking on the “send to trash” button.

Little League baseball field at Denison Park in South Corning. This is the “Minors” field. These players are somewhere in age and skill between “T-Ball” (4-6 years old) and the “Majors”. 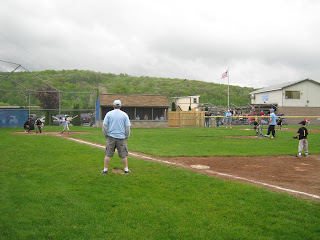 New park on Denison Parkway, a main drive through Corning. At the far end is a fairly new Walgreens. 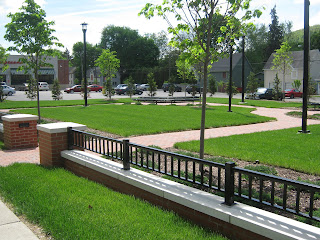 Corning’s many alleys have old-time carriage houses with the upstairs converted to apartments. 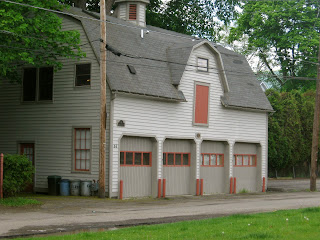 This converted carriage house is at the rear of the stately Rosewood Inn on Corning’s East First Street. 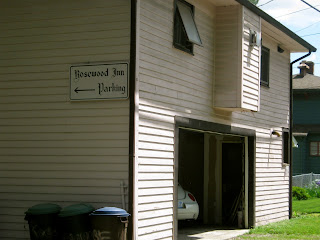 Market Street is always being spruced up. Here the front of Heron Creek gift shop is being painted. 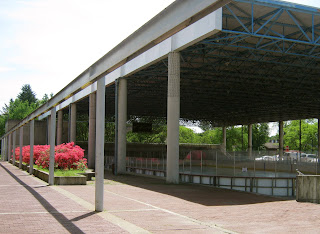 Centerway Square, at a midway point of Market Street. The square hosts musical events and those who wish to dine outdoors, even an occasional political rally. Unseen on the right is the “bandstand”. At the right rear is the tall clock. To its left is a public parking garage. Far left is the Information Center, the Chamber of Commerce and several businesses.

Again on Market Street, the second block coming from the east end. 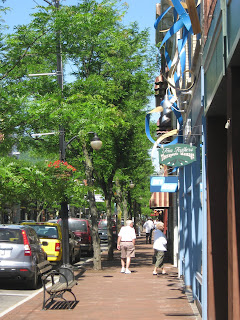 The first settlement in the town of Corning was made near the site of the future city in 1796. The community was set apart from the town as a village in 1848. Corning was incorporated as a city in 1890. As the glass industry developed, Corning became known as the "Crystal City."
The Corning area's first real industry was lumber. The first settlers used the area's river systems to transport logs and finished lumber in fleets downstream to buyers. This gave rise to large mills which helped to develop the area. Rafting of lumber began to wane as timber was depleted. At one time the mills of the Corning area were reputed to be among the biggest in the world. After the lumber was depleted the great mills moved north to new forests.

East, across the Chemung River from Corning, lies Gibson, the site of a feeder canal for the Chemung Canal system. Some of Corning's early prosperity came from the feeder canal system exposure. Canal cargoes from Corning included soft coal, timber, tobacco, grain, and whiskey. From April 22 to December 11, 1850, the canal season that year, the newspaper reported that 1,116 boats left the port of Corning. Tolls for the year totaled $54,060.39. Among items shipped were 46,572,400 pounds of coal. The canal's best peacetime year was 1854 when 270,978 tons of freight was hauled. The Civil War brought an abnormal amount of business, with a peak of 307,151 tons hauled in one year.[3]
After the Civil War, an industrial boom occurred in the region. Ingersoll Rand opened during this period in Painted Post, just north of Corning.

Posted by Kathleen Richardson at 7:01 AM